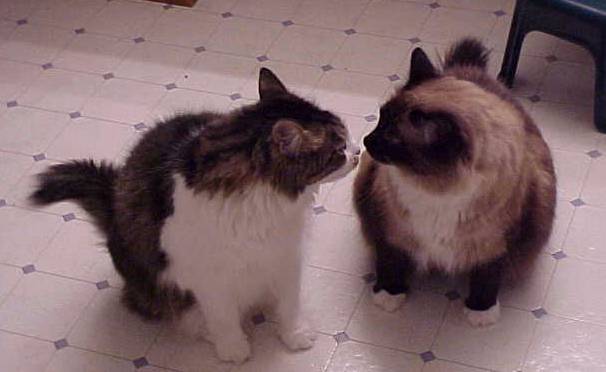 First of all I was against having my cats declawed from the very beginning. After arguing with my husband about the cats for 2 years I decided to look into declawing. Some people I've known most of my life have declawed cats and their cats have always been well cared for and healthy. The thing is that I thought declawing meant they were going to remove the claws, nothing else. The word declawing is in itself misleading because it should be called de- toeing.

I was very worried about this declawing but the vet tech reassured me that my cats would only suffer temporary pain and everything would be normal after that. They de-toed my cats and sent them home the same day with heavily bandaged front feet. I was told I could remove the bandages the next day or bring the cats back in to have the bandages removed. The first thing I found out was that Simba was not about to use the litterbox after having been declawed. He started using the carpet in the family room instead. Then I noticed that they were walking differently than they had ever walked before. I could see they were clearly in a great deal of pain and I called the vet's office to ask for pain medicine. They refused to give my cats any pain medicine because they said my cats would walk on their paws and damage them since they wouldn't be able to feel the pain. My cats continued to limp for weeks and were walking in an unnatural way. Shani eventually seemed to get better but Simba did not. I had to go into the vets office for another matter and while I was there I asked to make an appointment for Simba. I was told to bring him in the next morning. When I brought him in I was surprised to find only the vet tech and no vet in the office. She briefly looked at his paws and said "I don't see anything wrong" , she seemed angry that I had wasted her time. I then had to show her where there were scabs and a lump in his paw. She agreed to give him an antibiotic shot in his paws and she told me that sometimes cats regrow deformed nails inside their paws and he might need a second operation.

In the mean time I had switched Simba back to his regular kitty litter as I was told I could do so after a week. I had to retrain him to use the litterbox by confining him to one room. To this day we still have occasional problems in getting him to use his box because the family room is now scent marked. The carpet is completely ruined.

Simba's limp began to get worse again so I decided to get a second opinion. My new vet said both of Simba's paws were infected inside and he would need to do a second operation to remove more bone. It appeared that the paws had been infected right from the start and so had never healed properly. They were still scabbed over after 3 months. Apparently, because the wounds never healed kitty litter had worked it's way inside one of his paws. Thankfully the vet did not have to remove too much bone from Simba's feet and he can still walk. My new vet kept Simba overnight and removed the bandages himself. He also sent Simba home on an antibiotic to prevent any further infection from happening as would likely be done with an amputation on a human. I was not charged any additional amount for this extra care either.

Three of my cats were declawed. Of the 3 it took Shani 3 months to recover, it took Simba 6 months to recover and while Nermal was younger and recovered more quickly her paws look disfigured with loose skin hanging off of them. Also one of the reasons I adopted Nermal was because she was a very loving purring kitten. She tends to be very nervous now and spends a lot of time under the bed though she is still loving with me. I can't help but wonder if de-toeing caused this behavior difference. I can clearly see that my 3 cats walk flat on their feet compared to Shelby who is not declawed. Also, while other vets have denied this is a possibility my new vet said that cats may develop osteoarthritis as a result of being declawed. Only the future will tell me whether or not my cats will go through further suffering as the result of being declawed. Given a chance to do it all over again I would never declaw a cat.

Shelby has a sisal rope scratching post, has her nails trimmed regularly and I would use soft paws if needed.