When I was about three years old, a nasty, evil neighborhood bully threw a cat into a little rubber wading pool. I, being a catlover already, *saved* this cat's life. Of course, the cat didn't understand what I was doing and scratched my face. Cats rarely attack unprovoked. It just missed my right eye, slashing my cheek open down to my chin. Over forty years later, you can still see the scars. Mom took me to the hospital, doc gave me antibiotics and said "she'll be fine". It didn't leave me severely traumatized because my mother is a wise person and she didn't make a big deal about it. She didn't blow it out of proportion to what it was. A couple of scratches on a kid's face. Of course, my mother did have a few choice words to say to this little boy's mom.

My point in this story is that even if our cat had been declawed, it wouldn't have saved me from cats outside of our home. Children should be taught to respect the cat and how to play with the cat. The logic of declawing the cat to save the child makes about as much sense to me as not letting the child learn to ride a bike or climb a tree or do any of the thousand things that we do as children, because s/he might get hurt. Something else to think about; say you've declawed your cat because it's easier than teaching your child the proper way of interacting with your kitty. It's just too much work to watch Junior around Meowser. So, Meowser has ten digital amputations and Junior can do whatever he pleases to Meowser, without any repercussions from Meowser. Pulls Meowser's tail, fur, ears, whatever he wants, because you've had Meowser's first line of defense taken away. So, Junior learns that you can play rough with cats and nothing happens. You visit your sister, who is appalled by declawing and would never do such a thing to her beloved cat. And your adorable little Junior starts to play rough with your sister's cat. But, your sister's cat still has it's defenses and Junior pays the price. Who's fault? Not your sister's. Not the cat's. Not Junior's. It's your fault because you haven't done your job as a parent. Removing dangers in your home won't teach Junior anything about the dangers in the big world. You have to let Junior learn that a cat is a living, breathing entity, and that Meowser can feel pain, too. And when Meowser can defend himself, Junior will learn. And what kind of lesson are you teaching your child when you have your cat modified because your child isn't smart enough to learn a lesson? Not a very good one, that's for sure. (For help with children and cats, please check out Older Infants, Toddlers, and Cats by Sharon A.)

Nice furniture is nice. But it isn't that important to me. My cats will hopefully live long and happy lives. Which can be twenty years and longer. I don't expect my furniture to last that long, heck, our sofa is in worse condition from us sitting on it than from the cats' claws. But, I guess material stuff isn't all that important to me. We have a nice house, a comfortable house. I don't wig out over a little pull here or a snag there. To me, it's just part of owning a cat. But then people who think it's okay to declaw a cat for the sofa, would probably just love to own one of these (and before you get your panties in a wad, it's a satirical website, it's not real, but I wouldn't doubt for a minute there are some who wish it were real; you know, the folks who cosmetically alter their animals to fit their lifestyles). We're in the process right now of pulling up the carpet and putting down tile, spending over $6000 on tile alone, that we're installing ourselves, not because of claws, but because of inappropriate urination. It tooks us weeks to pick out the right tile, (you can see it here) because we wanted to make sure we we got something that didn't absorb and was easy cleanup. Did you know tile has different moisture absorbancy rates? We bought all new furniture because of pee, not claw marks. It's hard for me to understand people with only a couple of cats, not being able to train them. After all, we've got quite a few cats ourselves. You can see that we're people who modify our home for the cats, not our cats for the home.

I suppose some could think that I am a hypocrite, because I am an advocate of spaying and neutering. I don't feel that there is any health benefit to having a cat declawed, where it's been proven that spaying or neutering actually leads to a longer and healthier life for the cat. There is the argument that "Well, if it's a choice between declawing the cat, taking the cat to a shelter or having the cat put down, it's best to have the cat declawed." Just because a cat has been declawed, doesn't guarantee it a lifetime home. I am just amazed at the stories of declawed cats being turned into shelters. And appalled at the stories of declawed cats being found dumped or strayed. I read the tales of declawed cats becoming biters. It makes sense, what else do they have to defend themselves? And even more astounding to me, are the people that just say "Hey, I'm just too lazy to train my cat. I don't care what the surgery is about, or what they do to my cat. Just do it and give me the bill." And how about this one: "My cat was just fine the day after it was done." Did you know that cats are the only animals that walk on their claws? They walk toe first. Think about what it must be like to lose your toes, when that's how you walk all of the time. Do you honestly believe that the cat doesn't feel discomfort and pain? (Cats, by nature, hide their weaknesses. It's instinctual for them to hide pain and injury, so that they don't end up some predator's dinner.) What is expected? The cat to sit there and hold those little paws up in the air and say "look what you have done to me?" Of course not. They cope. They compensate. Just like humans do. Bobby lost one of his legs and both hip joints to a fight with an Akita over five years ago. He adjusted. But he isn't the same as he was before. He can't jump on stuff like he used to, but I would never, ever suggest that people do this to keep their cat off of things.

Our vet suggested that we have Bart, our polydactyl, declawed. He said there could be a problem with a couple of the claws not getting properly used. Or, we could trim them. Guess what? Declawing Bart was never an option. We bought some good nail trimmers, made especially for cat claws and they work like a dream. Did you know that by regular trimming of the cats' claws, that eventually the quick gets shorter? And there is not even a hook to the claw?

And the surgery itself is scary. If it isn't done properly, the claws can grow back in, deformed. Remember, the claw is an extension of the bone. Not like a human hand. Check out some of the links provided for drawings of the anatomy of a paw. And it has to be done over again. My neighbor's daughter works for a vet. Somebody had the surgery done at a vet that did a bad job and the paws wouldn't stop bleeding. She took it to the vet where my neighbor's daughter works and her boss had to re-operate on this poor cat. The cat died of a heart attack on the table. A pretty steep price to pay for being born with claws, don't you think? I had one woman tell me, that if the surgery was done by a good doctor, then it wasn't amputation. The cat's paws wouldn't be mutilated. Hmmm....does this mean if you get a facelift by an excellent surgeon, you didn't get a facelift? I'm sure some people in Hollywood believe this.

And declawing is a big money maker for vets. A lot of profit in that surgery. I can understand why many of them say "there is no proof that declawed cats have behavior problems, litterbox problems, etc." To do otherwise, would be taking money out of their pockets. A vet in Canada, who use to work at a clinic in the United States, said that 50% of the clinic's surgeries were declaws. Now that she's on her own, she won't declaw a cat. One vet advised his client to have his pedigree Bengal cat declawed. Said it would be better for the cat. Surgery is performed, months later the cat gets mean. The owner asks for advice from other cat owners, is told that declawed cats can become aggressive. The cat owner broaches this with his vet. The vet admits that some declawed cats do have behavior problems. The cat owner now feels very guilty for doing this to his cat. On his vet's advice!!

Dr. Louis J. Camuti, the first U. S. vet to have a practice exclusively for cats, in practice for over sixty years said: "I wouldn't declaw a cat if you paid me $1,000 per nail!"

Now, I have heard of some very rare instances where I can see the procedure done. The case of a cat that had eye surgery and kept scratching at his eyes, so they wouldn't heal. Here we have blindness or declaw. In this case, I would choose for the cat to lose his claws. But, as I said, it's a rare situation.

I just don't understand why people can't see what is wrong with declawing, given all of the information that's available. I doubt if I ever will. .

Countries where declawing is either illegal or not routinely performed:

*designed by Glenda Moore of CatStuff the premier site for cat graphics
Please visit our messageboard
Educate!! Don't Amputate!!
Any email sent to me regarding declawing will be posted on the messageboard
.

Saving paws and claws,
one owner at a time. 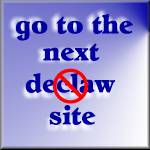