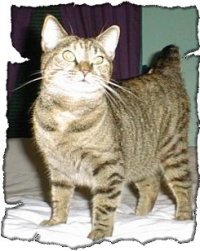 I know that some owners take their kitties to be declawed and they heal up fine and they feel there cat goes on normally through the rest of its life. I thought this too. I was wrong. Read on to educate yourself that not all of these surgical procedures go over smoothly. What I thought was going to be a simple thing turned out to be two weeks of torment for me and my kitty. I do not feel this procedure is worth the hassle. The suffering on the owner and the animal itself isn't worth a piece of material that does not live. Material things do not matter as much as a living breathing thing does ...

I would just like to state that my kitty before suffering this hell had an attitude that was unbreakable and like no other. People loved that about her. Since her surgery she has grown acustom to being "loved on" and around anyone who has a hand to pet her. I feel as if her "natural" behavior was just stripped from her like a medal.

On January 19, 1999 I took my kitty to the vet to be dropped of for what's considered a normal declaw. Happens everyday right? Kitties go home and everythings fine right? Well upon dropping her off they assured me it was a simple procedure and I signed a paper allowing her to undergo drugs and testing to assure she could take the drugs. They told me to pay when I picked Mama Kitty up and it would be an over night stay. I said okay, I said my good bye's and then I left to go to work.

I called constently checking up on kitty and to make sure she was okay. They told me she was fine and things were looking good. Well time came to get off work. I went home to a quiet motionless room. Sad I decieded I had nothing better to do than sleep. The next morning as soon as I got to work, I called to check on kitty and then since I felt ill I went home. Shortly after noon I called again to check if things were good to see if it was fine for kitty to come home. They said I could and I flew to the vet.

When I got there, gave them my name, and Kitties. They brought her out, and informed me she would not eat anything. So it's been a day in a half with no food or water for her. She immediately started "crying". She would not stop meow'ing at me. They told me to give her a pain pill twice a day (Torbutrol), to replace her litter with shredded paper, to keep her in a "quiet" area and not allow her to jump. They gave me a 15 minute speech of "after declawing care". The whole time kitty was whining from her carrier. Then came the payment. They said with hesitation it was $128. I looked at her and said wait a second. Before I could finish she started saying that she spoke with me on the phone yada yada, and went into this long explantion again. Kitty still whining I said look whatever tell me how much so I could get my kitty home where she felt comfortable. They had told me originally it was $120 even. When I signed the paperwork I was given that as my quote for everything. When I called to check up on her they included a $5 charge for a de-wormer pill since she ate a flea which gave her a worm? In any case it came to $125. And that was my now new quote. Well I ended up paying $128. Anyway, I finally I got to leave. Kitty whined the whole drive home as well.

When we got home and I took the top of the carrier, she flew out of it like a bird would a cage. She landed in the hallway where she walked around in a drunkin stooper. I noticed she had a piece of her paw like hanging from the right side of her left paw. Just kinda attached there, by what I had no idea. She also seemed to hold that left paw just a bit. She then disappered under the bed where she hid for 2 days. She would slowly creep out to grab a bite of food. But she would not touch her regular food. I had to go buy some of the moist canned food. Finally by that following Saturday she would come out if no one else was around. I got a glimse of her paw. I thought the left one was where she might have a problem. But it was her right paw swollen as big as a puppy's paw would be. I was concerned and called the vet. Closed at 1 and no emergency care # to call. I had no choice but wait till Monday (01/25/99). I got no sleep that night or Sundays as kitty was out of pain medicine and limping where ever she moved to. She even sat holding the right paw up.

That Friday I quit my job in order to take the next week off to give kitty as much TLC as I could and to recover from the cold I had at the same time.

Monday morning I called and got an appt for 11:00 am. When I brought her in I explained what she was doing and that her right paw other than looking swollen had what seemed to be a hole. I also asked what was with the little piece hanging on the side of her left paw. The vet told me that apparently it was glued on wrong. I followed with what was glued to what. She explained they went through kitties "peds" in order to remove her first joint and that they used tissue glue to put the "peds" back on so they can heal up. I (uneducated in this matter) said ok with a blank expression. The vet then squeezed kitties right paw and a pinkish bubble oozed out and she told me it looked like an infection. The vet then went on to say she would give kitty a shot to sedate her a bit to clip off the piece of paw they glued on wrong and clean her paws up so they could get a better look at her. When they returned kitty was so out of it she was laying half in the carrier and half out. Not through the front either, she was laying in the carrier from the side of it. How that was comfortable I don't know, but she didn't budge. The vet's helper placed her all the way in and the vet continued to explain all the meds they were giving me. I got more pain killers (Torbutrol) I also now had to force drops in her mouth twice a day along with the pain pill, and then soak her paws in Chlorhexiderm twice a day as well. Breathless I said okay and that was that. I ended up shelling out another $44 bucks and was informed my previous fee of $128 was showing unpaid. Apparently the dumb lady I spoke with on the phone didn't even know how to do that much, which leads me to believe she did over charge me or include something she shouldn't have. I argued with the lady at the desk and she assured me a bill would be sent to mark that as I paid already. I gave the additional $44 for the meds, rescheduled for a follow-up on the next Friday and went on my way to get kitty home and comfortable.

At home kitty went back into her hiding stage but only for about 12 hours. When she came out she layed down beside me on the floor where I could see both her paws. I noticed her right paw had a hole the size of a pencil eraser where her "ped" should have been. I have no idea what they did to her on that visit, but I don't feel it was good. Later that night my bf helped me to soak her paws in the solution they gave me. Her left paw started bleeding like we just sliced her foot open. An hour after the paw soaking I looked at her left paw and what would have been a pinky toe had no ped either. I have no idea if this is normal or what. They told me it was.